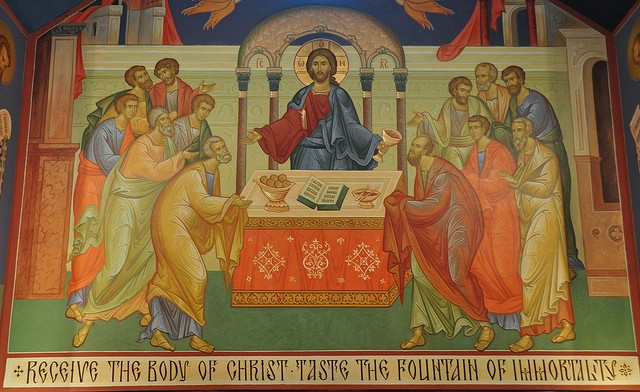 God gave us the Holy Mysteries, or Sacraments of the Church, for this purpose

"It is the Sacraments that constitute the life in Christ"--St. Nicholas Cabasilas.

Both of the terms "Mystery" and "Sacrament" are appropriate to describe the same thing.  Mystery comes from the Greek word mysterion, indicating deep reality that is known only through illumination (or initiation).   Sacrament comes from the Latin sacramentum meaning a pledge.   The services of the Church refer to Communion, for example, as the "pledge of future inheritance."

The entirety of the life of the Church is Sacramental, and yet we identify seven Great Mysteries of the dispensation of grace.  The Orthodox Church, however, does not limit the number of Sacraments to just the seven Great Sacraments; yet these still have a primacy.

God's precious gift of His Son and His Spirit is given through the Sacraments:  in Baptism the Son is received by the newly illumined, for as Scripture says, "all who have been baptized into Christ have put on Christ," as is the Spirit.  The initiate receives the name of Child of God, the name of Christian, and the name of Sanctified, having been baptized in the name of the Father, and of the Son, and of the Holy Spirit.  In  the Son received in full humanity and divinity in Communion, whereby the two become one flesh, and the Holy Spirit comes upon and dwells within the Communicant.   As the prayers of the Preparation for Communion reveal:  "may I be sanctified in body and soul, Master, may I be enlighted, may I be saved;  may I become your dwelling place by the Communion of hte Holy Spirit, having You, with the Father and the Son, living and dwelling within me."

WRITTEN RESOURCES ON THE SACRAMENTS:

On the Sacraments in general

On the Sacraments of the Church, by Met. Kallistos Ware

Articles on Holy Communion, the Great Mystery of Mysteries

The above are the three primary universally received Mysteries, because they are received by all the faithful, from infant to adult.  However, there are four more Great Mysteries, that are only received by some people.  Holy Orders are received by a few, but are of benefit to all, and is essential to the propagaion of all other Mysteries and the primary liturgical services of the Church.  It is still a universal Mystery, because although all do not receive it as a calling, all receive from it the other Mysteries.  Another of the Mysteries is received by all those who have come to the age and state of accountability, and that is Confession, aka the sacrament of Repentance and Reconciliation.   Holy Unction is received by the sick.  The Orthodox Church does not considered one deprived of this Mystery as lacking anything, and yet it is beneficial to all who receive it.  Marriage is received by all those who are called to it, which is most of humanity, but not all, and only by those who are of a marrying age and to persons who are eligible to be a spouse (i.e. no close relatives, etc.).

Holy Unction of the Sick

Our Venerable Father Luke the New of Mount Stirion (~950)

Julian Saint of the Day

The above audio readings are provided by AFR and are based on the Orthodox Revised Julian Calendar because a majority of Orthodox jurisdictions (and the largest three in the US) follow the RJC.  There are no audio readings based on the old Julian reckoning of the Menaion.

The Orthodox Calendars (both Julian and Revised Julian) are both the same with regard to the Octoechos, the Lenten Triodion, the Pentecostorian (Flowery Triodion).  The only difference is that observation of the Menaion (currently 13 days apart) and "shifts" that occur with regard to the Menaion (such as Lucan jump, and when major feasts fall on a particular day).

Give to God What Belongs to God!

Powered by Orthodox Web Solutions
About

Our Faith
Our Ministries
Our History
Our Liturgy
More...